A truss is a rigid engineering structure made up of long, slender members connected at their ends. Trusses are commonly used to span large distances with a strong, lightweight structure. Some familiar applications of trusses are bridges, roof structures, and pilons. Planar trusses are two-dimension trusses built out of triangular subunits, while space trusses are three-dimensional, and the basic unit is a tetrahedron.

In this section we will analyze a simplified approximation of a planar truss, called a simple truss and determine the forces the members individually support when the truss supports a load. Two different approaches will be presented: the method of sections, and the method of joints.

Truss members are connected to each other rigidly, by welding or joining the ends with a gusset plate. This makes the connecting joints rigid, but also make the truss difficult to analyze. To reduce the mathematical complexity in this text we will only consider simple trusses, which are a simplification appropriate for preliminary analysis.

Simple trusses are made of all two-force members and all joints are modeled as frictionless pins. All applied and reaction forces are applied only to these joints. Simple trusses, by their nature, are statically determinate, having a sufficient number of equations to solve for all unknowns values. While the members of real-life trusses stretch and compress under load, we will continue to assume that all bodies we encounter are rigid.

Commonly, rigid trusses have only three reaction forces, resulting in the equation:

Unstable trusses lack the structural members to maintain their rigidity when removed from their supports. They can also be recognized using the equation above having more system equations on the left side of the equation above then system unknowns on the right.

Truss systems with redundant members have fewer system equations on the left side of the equation above than the system unknowns on the right. While they are indeterminate in statics, in later courses you will learn to solve these trusses too, by taking into account the deformations of the truss members.

Simple trusses have no structural redundancy, which makes them easy to solve using the techniques of this chapter, however this simplicity also has a dark side. 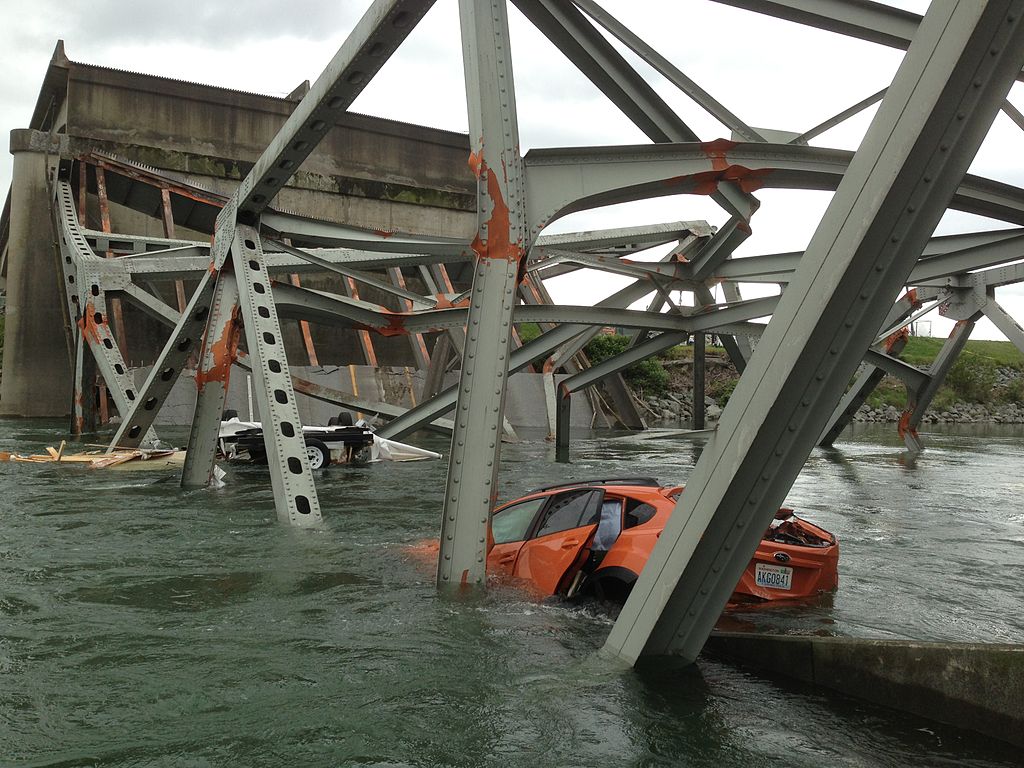 These trusses are sometimes called fracture critical trusses because the failure of a single component can lead to catastrophic failure of the entire structure. With no redundancy, there is no alternative load path for the forces that normally would be supported by that member. You can visualize the fracture critical nature of simple trusses by thinking about a triangle with pinned corners. If one side of a triangle fails, the other two sides lose their support and will collapse. In a full truss made of only triangles, the collapse of one triangle starts a chain reaction which causes others to collapse as well.

“Solving” a truss means identifying and determining the unknown forces carried by the members of the truss when supporting the assumed load. Because trusses contains only two-force members, these internal forces are all purely axial. Internal forces in frames and machines will additionally include traverse forces and bending moments, as you will see in Chapter 8.

Determining the internal forces is only the first step of a thorough analysis of a truss structure. Later steps would include refining the initial analysis by considering other load conditions, accounting for the weight of the members, relaxing the requirement that the members be connected with frictionless pins, and ultimately determining the stresses in the structural members and the dimensions required in order to prevent failure.

The initial steps to solve a truss are the same for both methods. First, ensure that the structure can be modeled as a simple truss, then draw and label a sketch of the entire truss. Each joint should be labeled with a letter, and the members will be identified by their endpoints, so member \(AB\) is the member between joints \(A\) and \(B\text{.}\) This will help you keep everything organized and consistent in later analysis. Then, treat the entire truss as a rigid body and solve for the external reactions using the methods of Chapter 5. If the truss is cantilevered and unsupported at one end you may not actually need the reaction forces and may skip this step. The reaction forces can be used later to check your work.

Consider the truss to the left. Assume that the dimensions, angles and the magnitude of force \(C\) are given. At joint \(B\text{,}\) there are two vertical collinear members as well as a third member which is horizontal, so Rule 2 should apply.

Cutting the members at the dotted boundary line exposes internal forces \(BC\text{,}\) \(BD\) and \(BA\text{.}\) These forces act along the axis of the corresponding members by the nature of two-force members, and for convenience have been assumed in tension although that may turn out to be incorrect.

The free-body diagram of joint \(B\) may be drawn by eliminating the cut members and only showing the forces themselves.

The situation is simple enough to apply the equilibrium equations in your head.

While it is probably easiest to think about Rule 2 when the third member is perpendicular to the collinear pair, it doesn’t have to be. Any perpendicular component must be zero which implies that the corresponding member is zero-force.

Analyzing the joint as before, but with a coordinate system aligned with the collinear pair,

Finally consider joint \(C\) and draw its free-body diagram. Does either Rule apply to this joint? No. You will need to solve two equilibrium equations with this free-body diagram to find the magnitudes of forces \(CD\) and \(CB\text{.}\)

On the other hand, if the horizontal load \(C\) was not present or if either \(BC\) or \(DC\) was zero-force, then Rule 1 would apply and the remaining members would also be zero-force.

The final truss after eliminating the zero-force members is shown to the left. Forces \(BC=BA\) and \(DC = DE\) and the members may be replaced with longer members \(AC\) and \(CE\text{.}\)

The original truss has been reduced to a simpler triangular structure with only three internal forces to be found. Once you are able to spot zero force members, this simplification can be made without drawing any digrams or performing any calculations.

Thinking Deeper 6.3.6. Why include Zero-Force Members?

You may be wondering what is the point of including a member in a truss if it supports no load. In our simplified example problems, they really are unnecessary, but in the real world, zero-force members are important for several reasons:

So finding a zero-force member in a determinate truss does not mean you can discard the member. Zero-force members can be thought of as removed from the analysis, but only for the loading you are currently analyzing. After removing zero-force members, you are left with the simplest truss which connects the reaction and applied forces with triangles. If you misinterpret the rules you may over-eliminate members and be left with missing legs of triangles or ‘floating’ forces that have no load path to the foundation.

Given the truss shown, eliminate all the zero-force members, and draw the remaining truss.

The remaining truss is shown. Note that once \(EI\) and \(BF\) are eliminated, you can effectively eliminate the joints \(B\) and \(I\) as the member forces in the collinear members will be equal. Also notice that the truss is still formed of triangles which fully support all of the applied forces.